"All the endless variety of external manifestations of brain activity is reduced finally to a single phenomenon - muscular movement."

Mechanics - the study of movement in space (i.e. mechanical motion) and the balance of material bodies (media) under the action of forces. Whether and to what extent the laws of mechanics can be applied to a living organism is determined by biomechanics. It studies the biomechanics of those patterns of living organism that allow it to perform mechanical (static and dynamic) tasks with minimal energy cost of muscle contraction.

The man regarded as biomechanics biomechanical design, consisting of a system of bone levers, which are connected by joints and ligament-muscular system, providing 256 degrees of freedom of man.

Moving the joints of the upper (arms, shoulders, neck) and lower (thigh, leg) belts are necessary for a successful fight in hand-and fist fight. It is important to feel as if the hinges in these places, be flexible, permitting the joints, ligaments and muscles. But this does not necessarily sit on the string and be able to do somersaults.

Now we are talking about easily, liberated from Trapped body, whose joints to allow a person to work in three planes and eliminate his straightness and rigidity of behavioral reactions. This applies to all levels of perception - visual, auditory and kinesthetic. It is important to learn to be "here and now" in three-dimensional space: there is a body of integrity in space from the head down to the extremities (hands and feet).

The spiritual and physical perfection depends largely on how harmoniously developed human muscular system, which, along with other systems ensures optimal interaction of the organism with the environment. Physiological processes, from the movement of blood in the vascular bed, digesting food, and to the most complex thought processes in the human brain, in varying degrees associated with muscle contractions.

Human Musculature is complex and diverse. Most of it are the so-called skeletal muscles. They are attached to the bones of the skeleton and the control of voluntary movements. Furthermore, interacting with the gravitational field, the muscles give the individual active movement in the environment, stimulate the metabolism and the work of all organs and systems of the body.

Muscular system needs many nutrients (proteins, fats, carbohydrates, etc.), so people should take care of the constant maintenance of sufficiently high functional level of their muscles. This can be achieved only active driving mode, which should be regularly engaged in gymnastic exercises in conjunction with other means of physical education.

In every form of martial art has its own specific system of movements that combine the concept of "technology" or "technique of close combat. Anyone who owns a technique to perfection, in most cases to achieve high results. Therefore, such movement - a kind of measure of combat skills.

In order to master the technique, you should regularly perform certain physical exercises. Some movements are a kind of benchmark, a goal to be pursued in a training pro-process, others - means when used properly, which can be successfully achieved the main goals in martial arts.

All physical exercises, usually characterized by varying educational, recreational and special focus. Therefore, before applying them, you must specify the purpose and objectives of their training, choose the correct and clear benchmarks. These may be characteristics of military movements, the indicators of the general functional status of various systems. For myself, you can install them, focusing on performance "combat" highly qualified.

In particular, with the help of physical exercises can achieve the desired mobility in joints, muscles necessary force, speed, endurance, etc. The more specifically identify goals, the easier it is to choose exercises. Choosing the right exercise allows a good knowledge of the capabilities of the organism.

Physical exercise should consist of movements or motor actions, biomechanical characteristics of which are more or less regulated (indicated, specified, limited). There are kinematic (space, space-time) and dynamic (power, inertial) motion. To regulate motor action - this means to indicate its quantitative indicators.

• bending his legs in the knee joint to 90 ° (regulation of the spatial characteristics);

• overcoming the distance of 100 m for 11.6 sec (regulation time characteristics);

• swimming at a constant speed 1.2 m / s (the regulation of spatial and temporal characteristics);

Do not always be to regulate traffic in quantitative form. You can specify only the qualitative differences motions. Additionally, there may be regulated by the intensity of the exercise (in speed, power, energy consumption), the volume of motor tasks (along traversable distance, made a mechanical or physiological work) and much more.

Exercise is only useful when they perform with regard to age, sex, and individual human potential. Every muscle - is not only part of the apparatus to the mechanical movement of the human body, but also an active organ, innervated, and supplying, strongly interrelated with other organs and systems.

Active (working) muscles and engages in relevant activities of the entire body, facilitates the transfer effects of physical exercise in a motor vehicle on the whole body. From what muscles are more actively involved in the implementation of a particular exercise depends on its result.

For example, if the work involves only the flexors of fingers, it is obvious that this exercise has little effect on the cardiovascular system. If the diaphragm is working hard, then at the same time, on the contrary, there is a significant impact primarily on the respiratory and cardiovascular systems.

Thus, the human body - a complex system consisting of dozens of joints. This device provides high mobility and flexibility of our bodies, ability to perform complex movements in space.

The main options for moving the body and its constituent elements in the space provided displacement, angular and spiral motion (Fig. 3.1).

Offset - linear motion, in which all points of the body moving uniformly along the axis in one direction. For example, linear motion is the train in a tunnel.

The angular movement or rotation, - a movement in which all points of a body moving uniformly around an axis running through the plane, points that are closer to the axis and rotate with less speed than farther from it. Rotation wheel cars, standing on the spot, or drop felled tree reflect patterns of angular motion. 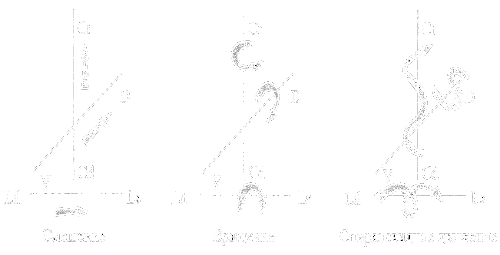 The spiral movement - a combination of angular motion with a displacement along the same axis simultaneously (e.g., by unscrewing the screw from the nut).The axis along which occurs spiral motion may or may not coincide with one of the three coordinate axes, and at an angle to them.

Coordinate methods - analysis of movement of the body and its constituent elements on the basis of mental expansion direction of three mutually perpendicular coordinate axes: vertical, frontal, sagittal (Fig.3.2).

The vertical axis (Cr-Cd) "passes" along the body downward (or upward), ie, from the head to the plane of the support (and in the opposite direction). Its other name - cranio-caudal (or Cauda-cranial). 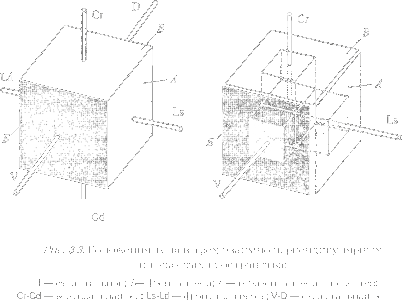 The front axle (Ls-Ld) "crossed" person in the direction from one side of the body to another through the shoulders, the axis has other names: longitudinal latero-lateral, left-sided.

Sagittal axis (VD) "permeates" the human body like the boom (Latin sagitta - an arrow) from front to back, so she has other names: lateral, ventro-dorsal.

Planar method - analysis of the situation and move the body, as well as its constituent elements on the basis of a mental division of space into three mutually perpendicular planes: sagittal, frontal, horizontal (Fig.3.3. Each plane is bounded by two coordinate axes, and a third penetrated at a right angle. 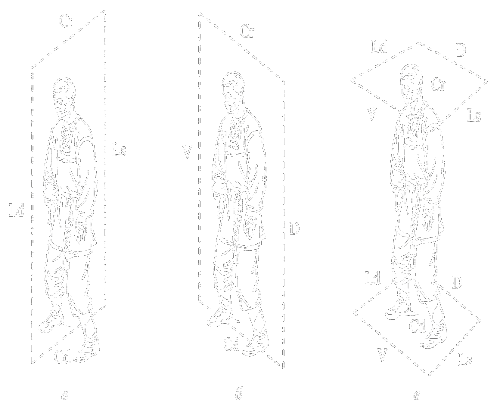 Frontal plane B is limited to the intersection of the vertical (Cr-Cd) and frontal (Ls-Ld) coordinate axes, sagittal axis (VD) is located in relation to the frontal plane perpendicular.

Horizontal plane in limited cross-front (Ls-Ld) and the sagittal axis (VD), the vertical axis (Cr-Cd) is located in relation to the horizontal plane perpendicular.

Coordination-plane method - evaluation of projective deformations of the body, performs motion along or around the axis with its projection in sequence on a different plane. Sagittal plane intersects the body in an anteroposterior direction, dividing it into right and left half (Fig. 3.4, a).

In the sagittal plane are: linear displacement along the Cr-Cd, VD, as well as along the axis inclined to the vertical and sagittal axes (cranial, caudal, ventral, dorsal, cranio-ventral and other offsets); angular motion (flexion, traction ).

Since the three-dimensional space, there are three planes (frontal, horizontal and vertical), any body in space has 6 degrees of freedom: 3 permanent (x, y, z) and 3 rotation around these axes (Fig.3.4, b, c, 3.5, 3.6).All Rights movement in the joint rotational (Table 3.1).

Rotations occur about axes in the plane perpendicular to them, so the work in the joints based on the principle of the lever (see Sec. "The leverage. "The Knot" forces "). Bone levers operate the muscles which in turn receive signals from nerve endings from the brain, then link the subcortex of the brain to the spinal cord is carried out unconsciously, the body begins, as they say and think.

There are six types of muscular work, which can be represented graphically (Fig. 3.7).

Depending on the goals and objectives of the training may be the focus on the development of force capabilities, speed, agility, endurance, flexibility, etc.

Power of biomechanics is defined as a measure of the interaction of the human body with other bodies, environmental regular muscle tension. 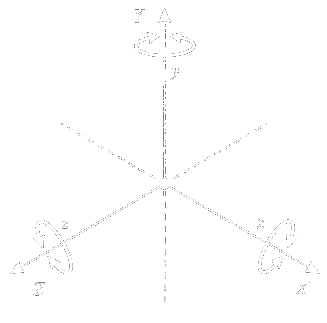 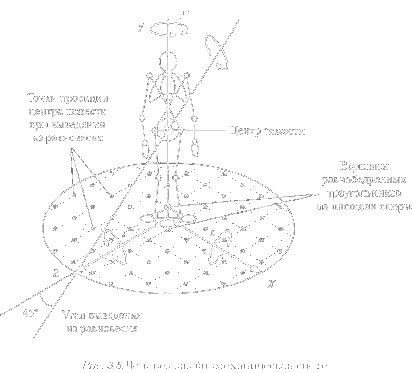 In this case the skeletal muscles can make it:

• without changing its length (isometric, or static mode);

Overcome and inferior modes are considered as a whole as a single dynamic mode of muscle. 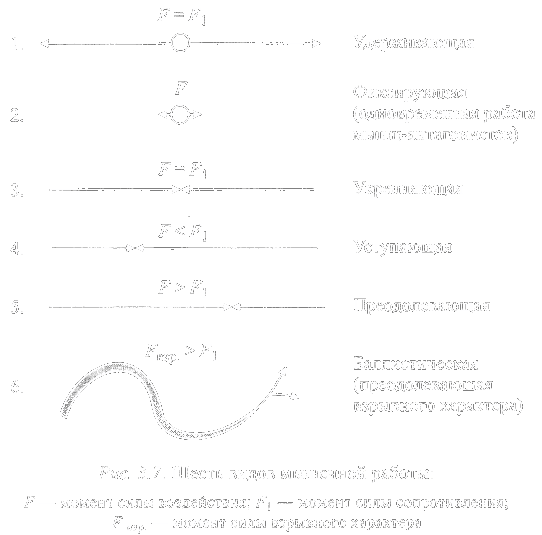 When raising the power capacity to engage must not only develop harmoniously force characteristics of various muscle groups of the body, but also learn to make good use of its power under various conditions.

If you exercise power capabilities is important to choose the right amount of resistance, encumbrances, as well as the optimal rate of exercise, to be able to regulate breathing. It should also be taken into account "the topography of power" involved (the ratio of maximum force of different muscle groups).

If you predominantly work strength exercises should be as active recreation use of walking, swimming, relaxation exercises.

It is distinct concepts of "speed" and "speed".

High-speed human abilities are the total manifestation of the properties of motility, as a hidden (latent) time of motor reaction, the rate of single movements, the frequency of movements, etc. Therefore, for the education of these abilities are needed to exercise maximum responsiveness. It may be surprising the ball, defensive action in response to an attack to receive in the fight, hand to hand combat, fencing or other sport. You can use the methods of re-, re-progression (with different accelerations) exercises.

The most effective exercises in which to exercise the utmost speed and power in his movements. These exercises develop speed-strength abilities involved, as the practice of sports and work involves more than an isolated manifestation of qualities quickness or strength, and their combination in almost all more or less complex motor acts. 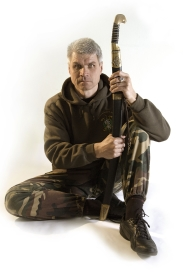