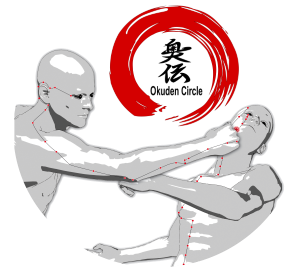 Kyūsho Jutsu describes the knowledge about the vital points of the human body and their application in the martial arts. Kyūsho Jutsu is not a martial art on its own but an art based on the conclusion of the principles used in acupuncture and their connections to the western neurology.

In Kyūsho Jutsu the points are used to manipulate the energy flow and neurological processes in a way that it affects the whole body. The effects can be pain, loss of equilibrium, loss of power, up to unconsciousness. However, in the same way that knowledge can be used to relieve different kinds of discomfort. Here the "Okuden Circle" focuses on high, worldwide standards. The most important point is that you have to learn how to neutralize or heal the effects you are able to cause.

The name Kyūsho Jutsu originated from the Japanese and means "art of the vital points". Also in the non-japanese martial arts the knowledge about those points existed with names like Dim Mak (China), Kupso or Hyol Do Bop (Korea) and Marma-Adi or Varma Kalai (India). Unfortunately, with increased emphasis on the sport side of the different martial arts that knowledge got lost in a broad part of the styles. Some single points are still known but their application in a wider way is rarely taught.

Because of the great flexibility and applicability of Kyūsho Jutsu it is possible to integrate it in nearly every known fighting system. Kyusho Jutsu brings the lost knowledge back into your martial art. In the "Okuden Circle" the Kyūsho Jutsu is taught style free under Grandmaster Jim Corn (9. Dan USA). That means it can be completely integrated into every style.