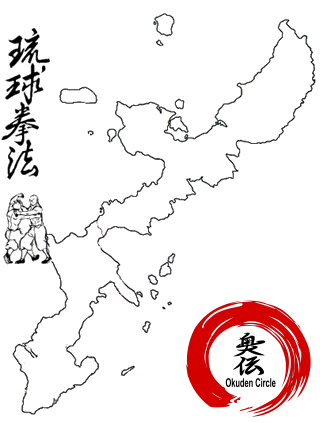 The Ryūkyū islands are a small chain of islands in the pacific, located between Japan and China, with Okinawa as their main center. Because of their location they were a strategically important trade center for both countries, which had a big cultural influence on the Ryūkyū islands. Ryūkyū Kempō (琉球拳法) is a martial art with its roots in the okinawan Te (手) "hand" and the chinese Qunáfă (拳法) or Kempō (拳法) "method of the fist". That way the Ryūkyū Kempō is a mix of the old okinawan and chinese martial arts.

What are the parts of Ryūkyū Kempō?

That describes the use of locking and grappling techniques in combat. Everybody has nerves, ligaments, muscles and joints and will react on the manipulation of them.

That describes the use of attacks to the vital points (nerves, blood veins, weak parts of bones, organs) in combat and self-defense. Further descriptions of Kyūsho Jutsu you can find HERE.

The kata in Ryūkyū Kempō are used as blueprints to the application of Tuite Jutsu and Kyūsho Jutsu.